On warm summer nights, sometimes I feel like eating something light and crunchy. I was Chicago last week and ate mostly pizza and sandwiches and came back craving fresh veggies =D Here’s a recipe I made over the weekend adapted from Great Food Fast (proof that great food doesn’t have to take much time or fuss) 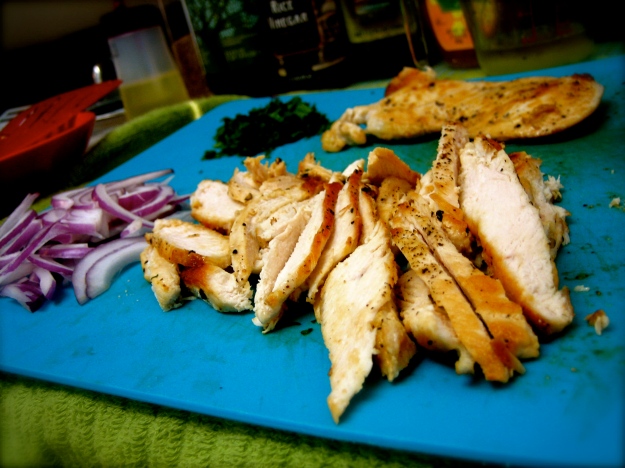 1. In a large bowl, whisk the 1/4 cup of olive oil, lemon juice, salt and pepper to taste. Add the cucumber; toss to coat and let it marinate while cooking the chicken.

2. In a nonstick skillet, heat the 1 TB olive oil over medium heat. Season the chicken with salt and pepper. Cook until golden brown on both sides, about 7 minutes per side. Remove from skillet, and slice thin.

Note: For the mixing bowl, don’t use a plastic one as the lemon juice flavor will linger (unless you don’t mind).

Highlights from the windy city

Eating at XOCO, Rick Bayless’ quick bite restaurant – my mouth is getting watery just looking at this picture

Admiring the amazing view of the green river that flows through downtown — I highly recommend the architectural riverboat tour. Did you know Wrigley company initially made soaps and included gum as a marketing ploy?